The concept of ImmuneSymbiosis, as described in the book by Dr. med. Dietrich Klinghardt and Ariane Zappe, forms the basis for the development of SophiaViva products.

The different remedies are coordinated so that they allow a complex and complete treatment in the sense of ImmuneSymbiosis.

Each remedy must always be evaluated in terms of its healing effect on the human AND microbial aspect of an organism. 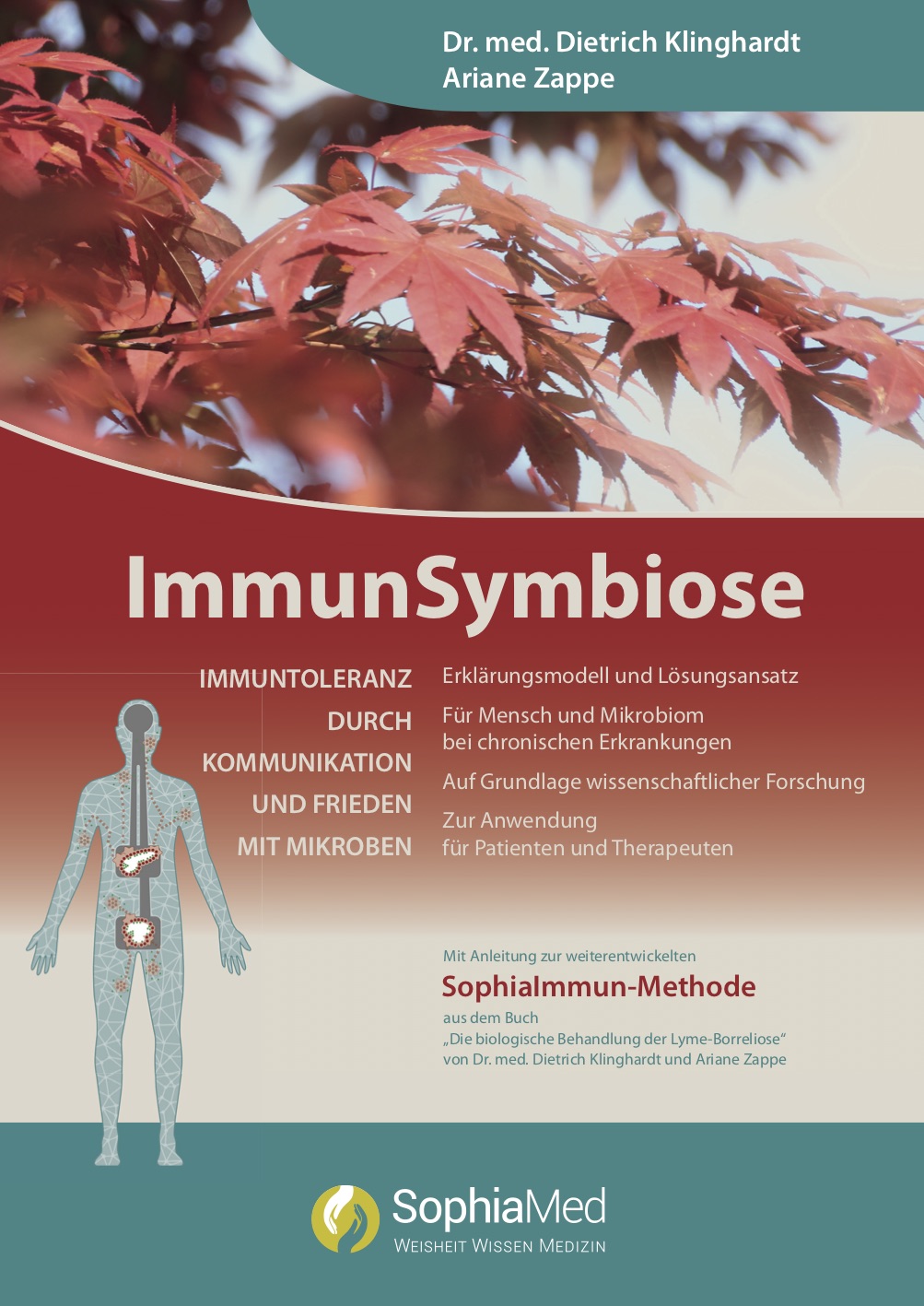 This book is currently only published in German.

After numerous discussions, a clear model for immune tolerance and immunomodulation emerged for us: every microbe becomes visible for the immune system mainly by electromagnetic fields generated by the microbe through metabolic activity in mitochondria, other cell organelles or its DNA. All of these oscillations create a gigantic, germ-specific orchestra.

One of the Nobel Prize winners of 2008, Luc Montagnier, discovered that the DNA of some bacteria and viruses in high dilutions in the ratio 1:10, comparable to the D-potencies of homeopathy, emits electromagnetic signals. Not only for homeopaths these are sensational releases:

Montagnier reports in this paper that he was able to measure the electromagnetic signals primarily from supposedly “pathogenic” germs (bacteria and viruses). In “physiological” bacteria such as lactobacilli no signals were measurable.

Now it gets really exciting for us when it comes to our definition of immune tolerance:

An immune-tolerant system generates the image frequency in exchange with the microbe.

The superimposition does not lead to an extinction of the wave, but to a so-called collapse of the wave or to a negative interference. The result is a standing wave, a wave that is there, but is no longer measurable by the superposition with its mirror image.

The immune system knows the microbe, communicates with it and works with it according to the definition of ImmuneSymbiosis.

Applied to Montagnier’s research, this means that the “physiological” microbes are the those with which the immune system is in resonance, that is, in contact, and that the corresponding counter-wave is produced as a result of immune tolerance. The DNA of these germs also emits electromagnetic fields, only they are not detectable in this case.

If a germ is “pathological” in the definition of Montagnier, its vibration is measurable, that means the immune system is not yet able to produce the corresponding mirror oscillation. This microbe must still be integrated into the ImmuneSymbiosis. Its electromagnetic signals are still recognized as non-symbiotic by the immune system and corresponding immune reactions are initiated. The patient suffers from these immune reactions being his symptoms.

When perfect communication between our immune system and the germ prevails, the immune system is able to produce the exact reverse vibration as a mirror image of the microbial vibration.

The orchestral vibrations of the microbes are still there, but the immune system does not perceive them as provocative. There is total communication between microbes and human. Information can be exchanged in the sense of ImmuneSymbiosis for the best benefit and evolution of the whole organism without energy loss by means of standing waves.

An effective way of generating a vibration are sound files. In the case of the microbiome DVDs

genuine samples of children and adolescents whose microbiome was still relatively unscathed, were sent to an institute that has been developing and using mathematical logarithms for decades for the conversion of matter into sound files. 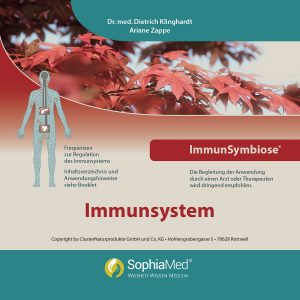 All DVDs can either be heard by sound transmission, or be transmitted via infrared transmitter like commercially available infrared headphones. In this case, it is sufficient to be in the range of the infrared light. Headphones must not be worn.

In the 1980’s, iontophoresis was developed: by applying 2 electrodes with direct current, substances applied to the skin (e.g. cortisone) could be transmitted deep into the body, e.g into the shoulder joint.

Shortly thereafter, phonophoresis was developed: ultrasound was also used to transport substances into the body.

In the 1990s Dr. med. Dietrich Klinghardt observed, that polarized, monochromatic laser light can be used in the same way. First, he used an 830 NM infrared laser to deeply transport remedies that were modulated onto the laser beam.

Earlier this century, it was observed that the field irradiation (exposure) from outside the patient with an ultra-bright laser on whose beam substances could be modulated, could trigger enormous healing effects even without the laser having to contact the body.

Teleportation of vitamins, remedies or microbiomes

Luc Montagnier, whose research was already described in the book ImmunSymbiose, made the following experiment: a closed test tube contained a virus culture highly diluted with water containing virus DNA, a second glass contained “empty” water, with no life in it. With a pulsed blue-violet laser beam, the virus culture was irradiated so that the laser beam also penetrated the second glass. After a short time, the researchers were able to detect parts of the viral DNA in the glass with “empty” water. He called this method “teleportation of DNA”.

Dr. Klinghardt drew the following conclusion: If we can transfer DNA to water with the laser, then it should also be possible to transfer vitamins, minerals or remedies to a whole organism with a laser beam, without using the material substances. This principle – the “Befeldungsmethode” Photophoresis  – has now been used for several years with great success.

Dietrich Klinghardt was able to show that the use of photophoresis can even lead to detectable changes of genetic mutations (SNPs that were detected before treatment could no longer be found by genetic tests after months of photophoesis treatment).

The administration of remedies can be reduced or even completely replaced in this way. An exception are binders (zeolite, chlorella, etc.), which we still needed in their natural form.

All laboratory data from the patient (for example hormones, neurotransmitters, vitamins) can be influenced and modulated by this method without the need for remedies or substances.

The ImmunSymbiosis DVDs (“ImmunSystem”, “Gut Microbiome”, “Skin Microbiome”, “Oral Microbiome”) can be applied at home even without an expensive laser. The duration of the application is longer though:

A DVD player can be connected to a standard infrared transmitter for infrared headphones. Please make sure that the frequency output of the transmitter covers the range of 20 Hz to 20,000 Hz and is transmitted in stereo.

Infrared radiation is particularly suitable for lowering allergies and shows neuroprotective properties. An application once per day is recommended, whereas the application via laser light modulation seems to be sufficient every 10-14 days.

The information of the digital files also reaches the human organism via sound waves. For this purpose, the DVD is audibly played. It is recommended to repeat the auditive application several times per day .